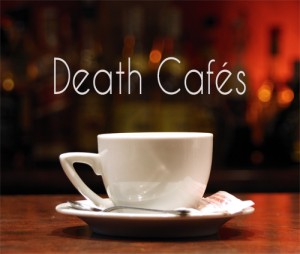 I had heard of the term Death Café from an industry blogger that I follow. The idea of a gathering of people getting together to discuss death was rather intriguing to me. I have to admit that I could not guess what a meeting like that could be like… the idea was rather macabre. Would people have questions about planning for their death? What sort of person would attend a meeting where the topic was death, anyway?

Upon doing some initial research, I found that the Death Café phenomenon has become popular in Europe, and one was first started in the United States in Columbus, Ohio.  There are many locales throughout the U.S.  Many can be found on Facebook.

So I decided to attend a local Death Cafe to satisfy my curiosity.  It was held at a local cemetery (yes..it was!) one weekday evening after work.  I had a little difficulty finding the meeting place, as there was no signage marking the right building, and no real parking lot that could tip you that “this must be the place.”  But after a little deductive reasoning, I finally made it through the correct door.  I was recognized by the person who had invited me, and was given a good cup of coffee just before taking my seat at the table.

There were 13 people in the group, with one acting as a moderator.  He started the meeting with a poem about dying, a cartoon with the subject of death, several folders worth of articles available for us to check out, read and return, and reviewed a few books with end of life as the topic.  It was presented very informally, and all were encouraged, but not forced, to participate.  The group was made up of ordinary people, not experts, with either a general curiosity about the subject of death or maybe some specific need they were looking to address.

Topics of discussion included the importance of addressing end of life issues including but not limited to:  Documents that should be on file with health professionals, making decisions and having a conversation with your family about your desires at the end of life, what leaving a legacy actually means, as well as the recent Oscar telecast and the success of the film about the early onset of Alzheimer’s, “Still Alice.”  There was no real structure to the conversation, the topics were sometimes initiated by the moderator, and sometimes just came up in the flow of conversation.

The hour went by quickly.  A lot of information was presented in an informal yet thought-provoking manner.  The atmosphere was far from macabre, despite its locale.  I came away with the feeling that even though the general topic is the same each and every one of these meetings is a unique experience.  I’ll be attending a second one in the future to test that theory.

I have been a death care industry professional for 10 years now. The burial process is a confusing one largely due to a lack of education. I am here to help. I have been helping families make informed decisions and help them to insure they can get what they want. So visit often and receive important information about saving your loved ones money and anxiety over the decisions that need to be made at the time of your death.

The topics will not always be about death. We will have some fun along the way.

I am available to speak on a variety of topics regarding burial planning and the cemetery business in general. Drop me an email at bill@billwelker.com for more information.

Check your email and confirm the subscription